Video is Your Best Bet for Attracting Younger Audiences

Nel Shelby’s role as a videographer and editor in the dance world has come to encompass a lot more than documenting performances. Beyond the creation of choreography reels and performance excerpts for presenters and grant-makers, using video as a creative marketing tool has come to be one of the most exciting – and underused! – things that we do at NSP.

In Capturing the 20-Somethings, an article in Dance Magazine, writer Candice Thompson discusses the successes of New York City Ballet’s attempts to make and maintain relationships with younger audiences. This is one of the dance world’s big questions and main challenges: how to attract and keep the attention of the younger generation. It comes up in conversations on every level – from independent, emerging choreographers to major festivals – but it seems particularly vital to solve in the ballet world, where performances of centuries-old story ballets can feel just plain stale to the hip, unconventional, tech-centric young adults the companies want to buy tickets. (I know firsthand, people. I’m a member of this generation.)

New York City Ballet, though – they are killin’ it.

I geek out about them and share their best practices with clients (and friends) a lot. I went to my first NYCB performance during their ArtSeries this past Spring, and it was like one big awesome young folks’ mixer that happened to also have excellent ballet. It felt worlds apart from what I’m used to in the ballet world (in the best way) both in terms of how they programmed the performance and presented the space, and in terms of how they were communicating with me about the show before and after it happened. Really, really important things are happening here!

Not only did NYCB email me before the show to tell me I could reserve a drink online and pick it up at concessions during intermission, if I wanted – um, what?! – but they sent me beautifully produced video and other great visuals to get me up to speed on what I’d be watching, who was important, and why this was so cool I should share it with 15 of my friends. After the show, they even sent me a discount code to use on my next ticket purchase. All this happened in a way that was sincere and charming and gorgeous, and most importantly, never pushy.

Cool. What is it about video, again?

While the avenues through which the company reached me are important for a young audience member – email, Facebook, YouTube – the content, or most importantly, the video content, is what I shared and remembered and talked about later. The videos made the dances come alive and reminded me why it’s sexy and fun to see them in person, in the theater. The videos told a story without seeming sales-y or artificially “young.” The videos were the reason I bought my tickets. And the videos are what I’ll notice next season, too.

So, why should your dance company invest in creative dance video to promote your performances and tell your story?

Because it is the very best way to attract the attention of those who, like me, are young enough to require more targeted and creative communications to get my attention and old and professional enough to invest in your art by becoming a repeat ticket buyer, joining as an entry-level member, donating a small amount now and maybe a large amount later, and more. Not only that, but your video is what I’ll share on Facebook to show my friends. And maybe you’ll hook them, too.

PS: Still not convinced? Just take a look at the awesome role video played in Vail International Dance Festival’s social media stardom this summer. Making these videos was a planned effort. Nel and her team worked day and night at the festival to execute an agreed upon vision. And they were able to represent the festival in a way that lets you know what it feels like to be there, inside the magic of it all. Behold, the positive buzz they generated. Behold, the power of video. 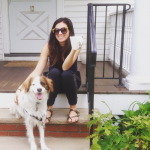 Amy Jacobus is Nel Shelby Productions’ Marketing & Project Manager and a fierce advocate for keeping the dance world relevant by taking full advantage of digital mediums, fresh storytelling and concrete analytics. She also consults on digital marketing and communications with other small businesses, non-profits and independent artists. She loves her dog and bakes fancy cakes and she strongly suggests you think about making fun films with NSP this year to share and promote your awesome work.